We were recently sent a book called Stick Dog Wants a Hot Dog for my son to review. It is a proper book, with chapters, which was a new thing for my son, who is only four. I wasn't sure if his attention span would stick with a longer book, but I needn't have worried because there is a character called Poo-Poo! This meant that he was listening intently waiting for the time he could hear his mum utter the words poo poo before he collapsed in giggles on the floor! After the first chapter the giggles subsided slightly, but the sniggers continued until the end of the book. It took us a week to get through the book at bedtime each night. It was a really enjoyable read and we even caught the teddy bear having a peek!

What they say.
In this second book by Tom Watson, Stick Dog is at it again—and he's hungrier than ever. He and his four friends, Poo-Poo, Mutt, Stripes, and Karen, must execute a master plan to steal some hot dogs. But the closer they get to the hot-dog vendor, the more obstacles they meet, including:

A team of raccoons that wants the hot dogs too
Hot-dog-snatching plans that are a little, umm, not so hot
A dognapping . . . sort of
Readers will delight once again as Stick Dog and his gang of goofballs work to overcome these challenges and more—to satisfy their hunger for hot dogs. 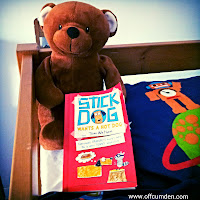 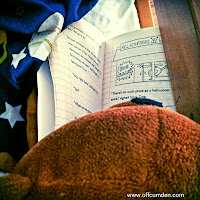 Good points
Great story which was well told.
We both loved the illustrations.
Kept my son entertained throughout the whole book.
It would be great for children who could read by themselves too and the lines on the pages make it a lot easier to read.

Bad points
I found that I had to explain what a lot of the things in the book were because the narrative is American. I also found it jarred slightly when I was reading aloud. Although reading in an American accent helped!

Would I buy it?
Yes. It entertained my son and was funny. I liked reading him a bedtime story which continued every night and it reminded me of being a child and having stories read to me.

Stick Dog Wants a Hot Dog is available to buy now and the RRP is £5.99. You can find out more information here.

Disclosure: We received a copy of the book for the purpose of review. All opinions are my own.
Posted by Helpful Mum at 12:24